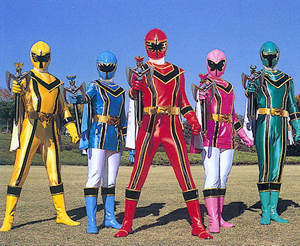 Mahou Sentai Magiranger (Magical Squadron Magiranger) is the twenty-ninth program in the Super Sentai franchise, airing for 2005 to 2006. The Title Theme Tune was performed by Takafumi Iwasaki.

Years ago, a war broke out between the heavenly plane of Magitopia and the hellish underworld of Infershia. The divine warriors of Magitopia were victorious, and placed a great seal on the gate to Infershia. Now in the modern day, that seal has begun to weaken and the demonic hordes within have put into motion a plan to revive their god, N Ma.

The only hope for the world rests with the Ozu family, five ordinary siblings who suddenly discover that they are the heirs to a secret magical legacy. Drawing arcane power from courage, they transform into the Magiranger and must master the art of magic to defend the world from evil. They are later joined by Sixth Ranger Hikaru, a legendary hero of Magitopia who becomes their mentor.

The motif this time around is "Magic", and the theme of "Courage" and "Family" is also strong all over. Also the first Sentai team to don capes since... around the first time. This series was adapted in the Western Power Rangers franchise as Power Rangers Mystic Force.

Partnered with the Kamen Rider series Kamen Rider Hibiki before concluding its airing alongside the first episodes of Kamen Rider Kabuto in the Super Hero Time block.

When three of the five Ozu siblings and their magic mentor witness Kai and Houka acting like one another, they all realize that the two have switched bodies.

When three of the five Ozu siblings and their magic mentor witness Kai and Houka acting like one another, they all realize that the two have switched bodies.