Manga / Yamada-kun and the Seven Witches 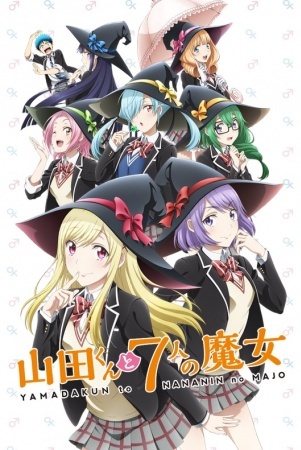 The eponymous characters. Clockwise from the upper left corner: Ryu Yamada, Mikoto Asuka, Rika Saionji, Meiko Otsuka, Nene Odagiri, Urara Shiraishi, and Maria Sarushima. In the middle: Noa Takigawa.
"Long ago - well, not really, but shush - there lived a boy named Yamada. Yamada was what you would call a problem child. All the students at his school were afraid of him. Then one day... Something happened and Yamada was never the same."
Advertisement:

Yamada-kun and the Seven Witches (山田くんと7人の魔女, Yamada-kun to 7-nin no Majo) is a shounen supernatural romantic comedy manga with elements of ecchi and gender-bending by Miki Yoshikawa, the creator of Flunk Punk Rumble (who was an assistant to Hiro Mashima, explaining why the artstyle bears some resemblance to Fairy Tail). It was serialised in Weekly Shōnen Magazine from February 2012 to February 2017, ending on its five-year-birthday after 243 chapters.

Ryu Yamada is a second-year student at Suzaku High. Ryu is always late for school, naps in class and gets abysmal grades. The beautiful Urara Shiraishi, on the other hand, is Suzaku High's brightest student. One day, without explanation, their bodies are swapped! Ryu ends up in Urara's body, and Urara in Ryu's. Thus begins Yamada's journey into the world of Witches and Suzaku High's mysteries.

, though only as a promotional video for the manga. One million views for this promo video led to the production of an actual anime. The first OVA came out on December 17th, 2014. The anime series began airing in April 2015 as part of the Spring 2015 Anime season, running for 12 episodes. The second OVA was released in May 2015. Crunchyroll has the home video license and released it on Blu-ray and DVD with an English dub

. The series later ended up part of Crunchyroll's partnership with Funimation who distributed the show on DVD/Blu-ray in July, 2017

The manga and adaptations provide examples of: