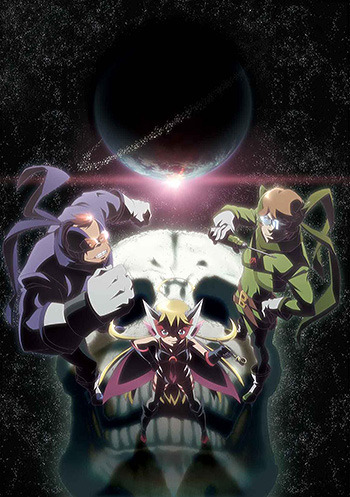 The Terrible Trio is back.
"Be pure! Be right! Be beautiful! So long as Doronbo exists, Yattermen have no place in this world! We'll drive the darkness away, and bring a new dawn!"
— Leopard, leader of the new Doronbo Gang
Advertisement:

Yatterman Night (Yoru no Yatterman) is a Winter 2015 Anime created in celebration of the 40th anniversary of Tatsunoko Production’s popular Time Bokan series.

Long ago, a pair of heroes known as "Yatterman" fought against the mischievous Doronbo Gang and won. Now the Yatter Kingdom is protected by a new generation of Yatterman, but something very strange has happened: the mysterious New Yatterman have imposed a brutal dictatorship upon their people, and are forcing them into hard labour.

Rising up in rebellion, one young girl takes on the name of the legendary villainess Doronjo and reforms the Doronbo Gang with the aim of smashing the New Yatterman's regime.

Funimation has gained the licence

for the series, and is airing it under the name Yatterman Night. The preview can be viewed here.