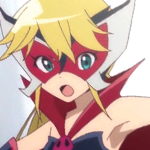 "We need to give Yatterman a good forehead flicking- no, we need to take Yatterman down!"
Voiced By: Eri Kitamura

A little girl who originally lives on a farm with her mother Dorothy, and her mother's helpers Voltkatze and Elephantus. She grows up hearing stories about the heroic Yattermen, as well as the Yatter Kingdom that lies on the other side of the sea. After walking inside an abandoned building, Leopard learns that she is a descendent of Doronjo, the leader of the Doronbo gang who fought against the Yatterman. Initially she resolves not to follow her ancestor's example, but this changes when Leopard, Voltkatze and Elephantus try to go to the Yatter Kingdom to ask for help in curing Dorothy's illness. They are driven away by the Yattermen and without aid Dorothy dies, causing Leopard to decide that the Yattermen were never truly heroes to begin with. In order to punish them, she restores the Doronbo gang as the new Doronjo. 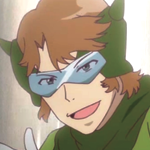 The descendent of Boyacky, he has inherited his ancestor's mecahnical skill. Voltkatze's family has served Dorothy's family for generations, and he acted as one of Leopard's caretakers. When the attempt to save Dorothy fails, he joins the reformed Doronbo gang as the new Boyacky. 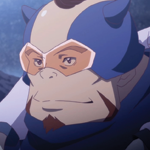 The descendent of Tonzura, he has inherited his ancestor's prodigious strength. Like Voltkatze, his family has served Dorothy's family for generations, and he acted as one of Leopard's caretakers. When the attempt to save Dorothy fails, he joins the reformed Doronbo gang as the new Tonzura. 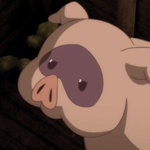 A pig at Leopard's farm that travels with the Doronbo gang. The counterpart of Odate Buta, the robotic pig that appeared in the original series. 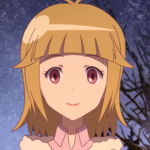 A girl living on the outskirts of Yatter Kingdom. She has a cheery disposition, but she is rather sensitive. After Yattermen took away her parents and dog to Yatter Metropolis, she had a stong hope that they would return. When she was told they had died, the trauma of the news affected her so much she went blind as a result. She refuses to believe her parents were killed, and prays for an angel to lead her to them, no matter how impossible it might be. 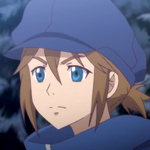 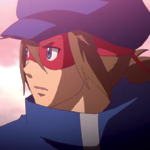 "If it's odd, I'll stay. If it's even... no! This is something I've got to decide for myself!"
Voiced By: Hiroyuki Yoshino

A boy living on the outskirts of the Yatter Kingdom with Alouette. He is indecisive, and tends to rely on dice to decide whatever he wants to do. He is an expert seamster, and was the one responsible for creating the Doronbo's outfits. After losing his parents to the Yattermen, Galina vowed to protect Alouette from suffering the same fate. Due to this resolve, he decides to join the Doronbo. 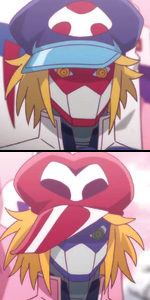 The protectors of the Yatter Kingdom, modeled after Dekkaido's previous saviors. Serving as the nation's police, they monitor every inch of the kingdom on the lookout for disturbances of the peace. They are ruthless, merciless, and swift in punishment... except when they're not. As the episodes go by, they're also shown to be just as Hot-Blooded and filled with pork as the main characters, not to mention absolutely silly where it counts. Despite this, they're still willing to serve Lord and Lady Yatterman to the death if need be. 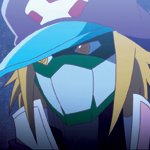 Like his name implies, this particular Yatterman serves as captain and commander of the Yatter Army.

General Goro and his dog Wan 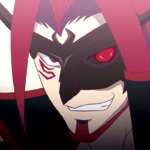 A ruthless general working under Lord and Lady Yatterman, accompanied by Yatterpug. After his initial meeting with the Doronbo, he decides to hunt them all down. In actuality, he's the long-absent parent of Alouette, the kind and caring Mr. Gorozo. Before being sent away to Yatter Metropolis, he entrusted Galina to take care of his daughter and dies in a factory explosion not long afterwards. However, he was brought back to life by Lord Yatterman and given new life as General Goro. 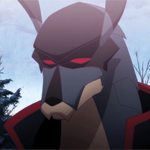 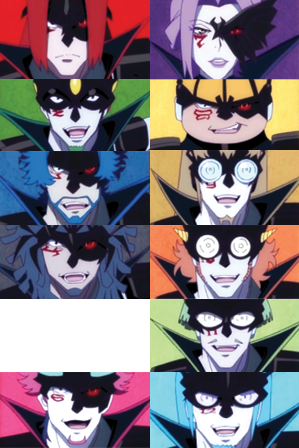 The twelve generals of Lord Yatterman, of which Goro is a member. 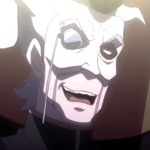 "In other words. there is no Yatterman. In a manner of speaking, I am the Yatterman. So greetings, Doronbo! I'm Lord Yatterman."
Voiced By: Hori

During the series, its said that the Yatter Kingdom is ruled by Lord and Lady Yatterman. When the new Doronbo gang is finally captured, Lord Yatterman has them brought to his throne room and reveals his true identity as Dokurobei.

After leaving Earth in the original Yatterman series, Dokurobei was still really annoyed that the Yattermen had tried to stop him. He then returned to Earth many times in order to get revenge on the Yattermen, but they still kept beating him. He gets so fed up that he exiled the Doronbos' ancestors and then launched a full-scale Colony Drop war on Earth. After he finally defeated the Yattermen, he decided to complete his revenge by ruling over humanity as "Lord Yatterman". 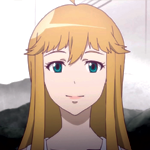 Leopard's kindhearted mother. Although she lives in the slums, she makes do with her surroundings as best she can. She has an unknown illness, but despite this, she tries to be a strong a mother as she can be so her daughter can grow up in a better place. Unfortunately, her sickness caught up with her on her daughter's ninth birthday, and ended up dying as a result. She is the main catalyst of Leopard's desire to fight against the injustices of their world. 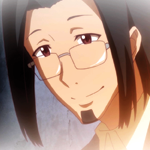 Alouette's long-absent father. Unfortunately he was separated from his daughter at some point in time in order to serve time in Yatter Metropolis until his life ended in a tragic factory explosion. For his tropes post-mortem, see General Goro. 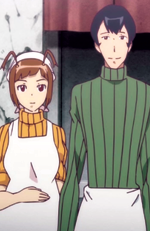 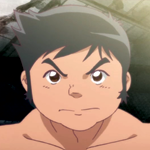 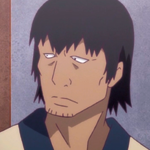 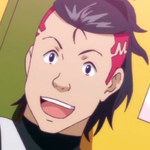 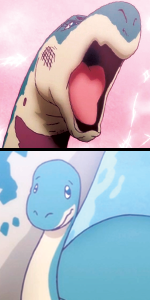 "Kussies" are a type of rare sea monsters who resides in Lake Kussharo-Dessharo living peacefully with their local residents around the lake. But since the Yatterman Government has taken the entire town away to be placed in labor, a Kussie became enraged with the Yatterman Army, leading to her being separated with her child, called a "Kuuchan" by humans, and was further abused by the army. One of her Kuuchans managed to encounter the help of the Doronbo gang, and was successfully reunited with it's mother.

Sanpei the Monkey and His Owner's Car 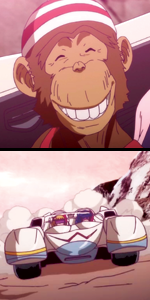