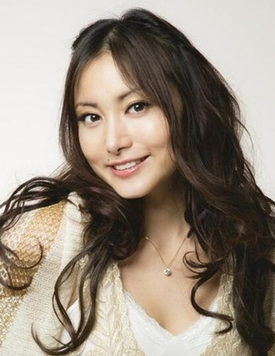 It's NOT Boobie Lady, it's Chiaki Takahashi... or Chiaking if you prefer... Oh, hello troper, are you here for a checkup? Wha? My description? Oh my... all right.

Chiaki Takahashi (AKA 'Chiaking') is one of the more popular voice actresses today, born on May 8, 1977 in Yokohama, Japan. Currently freelance, she once sang with Yui Horie and Akemi Kanda as part of the group Aice⁵. Her roles are in general had Fanservice, or if not, at least of the Cool Big Sis type. Although as of late, her roles have been taking darker turns in a way that they may end up as a Heel, though mostly sympathetic ones.

She is Ms. Fanservice herself; at 31, she had the daring to pose for a gravure magazine, and people are hoping that other female seiyu will do the same. So far, Rie Tanaka (in a bunny suit) and Aya Hirano had done the same, but there might be more, if I am not mistaken.

And if it wasn't enough, she posed nude on a magazine, and it will be her last to concentrate in being a voice actress.

. Only Ryoka Yuzuki and Yurika Ochiai [also an Idolmaster voice actress like Chiaki] had been known to pose nude in their careers. For a tamer version, if she appears in cons, you can be assured that there is an Absolute Cleavage in her suit. At this point, many would agree that she would be considered as the sexiest voice actress.

Oh, and she's also heading up 'Forever 23' movement, similar to Kikuko Inoue (17) and Yūko Gotō (29), along with her best bud Asami Imai. She is not related to either Hiroki Takahashi, Mikako Takahashi or Rie Takahashi.

Ufufu... it was such a fun description, Troper-san. I'll see you tomorrow then... *Beat* Ara? Aren't we supposed to be at The Other Wiki?
GET SERIOUS!