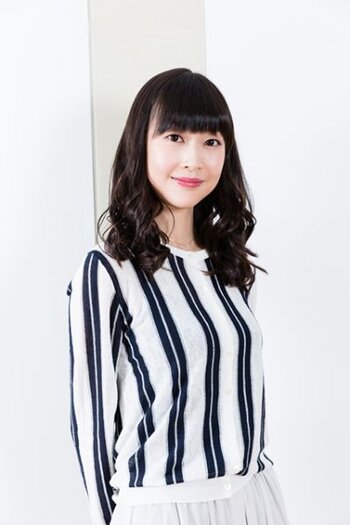 One of the more popular seiyuu since the Turn of the Millennium, Mamiko Noto (born February 6, 1980 in Kanazawa, Japan) is known for her soft breathy voice, which is worshiped by some and derided by others as ridiculously "cute". She tends to play either Moe or otherwise Nice Girls, but one thing that makes her so famous is her ability to adapt to almost any type of role, even incredibly creepy ones — well, so long as the character is a girl or a young boy (though, on occasion, she has portrayed an older woman). She has a long-standing friendship with fellow seiyuu Ayako Kawasumi and Nana Mizuki.

She's a member of the seiyuu group "MORE PEACH SUMMER SNOW" alongside Chiwa Saito, Haruna Ikezawa and Ryo Hirohashi (co-seiyuus in Sgt. Frog; Hirohashi is also a co-seiyuu in CLANNAD and Taisho Baseball Girls, while Saito and Ikezawa worked with Noto on Maria Watches Over Us, with Ikezawa also being in Girls Bravo). Mamiko had visited Otakon 2007 in Baltimore.

Though they're not that closely related, Noto seems to have a relation with fellow seiyuu Kaori Shimizu. If the latter appears in one series, the former has a high chance of also appearing in that series (though it doesn't generally work in reverse), and it's also probable that Noto's character will be under the care/supervision (or maybe the junior) of Kaori's character (case in point, School Rumble and Haruka Nogizaka's Secret; in other cases, they're companions, such as Endless Frontier). It's also listed in The Other Wiki that Noto's voice is very hard to imitate, but Kaori is the only one to ever come close to imitating it, a feat that fellow seiyuu Kikuko Inoue can also do with remarkable results. According to Anime News Network

, Mamiko is the second-most prolific Japanese female seiyuu at a whopping 446 roles, surpassed only by Kikuko.

In addition, it's easy to be confused with Noto and Saori Hayami because of the latter's similar manner of conversation and the relaxed timbre of her voice.

In September 2018, she revealed that she got married to someone who's not an actor. Mamiko gave birth to her first child on February 1, 2019.

Here is Mamiko in GPS form

Notable roles by Mamiko Noto ("Or maybe we should say, her most well known ones? No? How about 'Good Civilizations'?):

I knew it, this life-ruining site is Bad Civilization!!