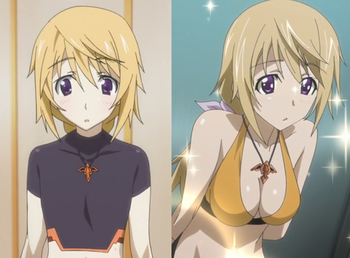 "I knew Victoria's Secret Compartment was secret, but this is just ridiculous."
"What kind of fourth-dimensional corset do these anime chicks wear that can turn a G-Cup into an ironing board?"
— Zachary Rogers
Advertisement:

Big-breasted girls with shy personalities and/or a history of being harassed for their "assets" by either lecherous men or envious women (i.e. D-Cup Distress) may tend to hide them from view, either by wearing baggy clothes or by outright suppressing with bandages, tight bras, etc.

Not to be confused with Suppressed Mammaries, where a woman (generally an actress) keeps her assets "at bay" temporarily and with a specific goal/task/purpose in mind.