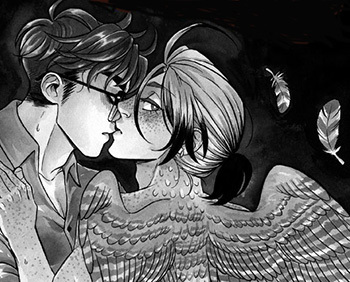 Nerd Boy and Bird Boy
Avialae is a Boys' Love webcomic by Lucid that is, in the creator's own words, "about a gross bird boy and his nerdy wannabe ornithologist boyfr--I mean neighbor who helps him out during the painful and bloody process of growing wings."
Advertisement:

More specifically, Gannet Sharpe is an everyday emo gay teenage boy who hates his town, his bird-loving neighbor, and just wants to get laid. His existence becomes not-so-everyday, however, when he wakes up one morning and finds out that wings have begun sprouting from his back. His bird-loving neighbor, Bailey Gilbert, discovers his secret and helps him bind his wings so that they won't be noticed by others.

Gannet now has to be careful to keep his still-growing wings a secret from everyone else, figure out just what caused them, and deal with his developing feelings for Bailey, all while trying to lead as normal a life as possible.

The webcomic can be read at the creator's site

(warning for R-18 pages). Its creator also has a Patreon account

where extras and doujinshi of the webcomic can be purchased.