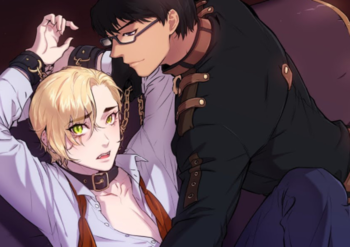 Shell (left) and One (right), completely belying the nature of this comic.
Advertisement:

In a World… where vampires have been the ruling class for over a thousand years, humans serve under them as blood sources and menial workers. One of these humans (coincidentally named One) is an outlier; he is somehow immune to the Pheromones of vampires, which allow them to control humans. Since the vampires would be unlikely to take this very well, he keeps it a secret and hopes to live a quiet life as a relatively fortunate banker. Things get more complicated, however, when his immunity is discovered by Shell Overlord—not only a vampiric aristocrat, but the next in line to take control of One's workplace, the titular Blood Bank...

Blood Bank is a now-concluded Yaoi comic written by Silb; it is 61 chapters long and very NSFW. The first few chapters can be read for free here