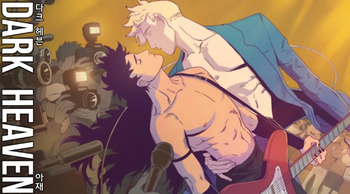 Conor and Simon.
"Please don't deny my happiness just because you can't understand it, just because it doesn't conform to the majority. Nobody can tell me that the way I love is wrong."
—"Conor Lee"
Advertisement:

and formerly published by Lezhin Comics in English, Dark Heaven (다크 헤븐) is a Queer Romance manhwa that tells the story of Conor and Simon, two childhood friends who fall in love with one another while forming a band. Torn apart by the harsh reality they live in, both lovers are reunited through the most unlikely of circumstances. Will they be able to make their romance work a second time?

This work explores serious issues like domestic violence, homophobia, racial discrimination, drug abuse, and self-loathing. Not intended for the faint of heart.

Has no relation to the horror movie