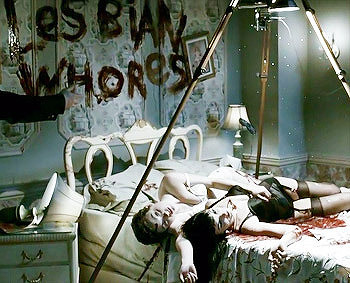 "On Lou's lips a trace of pinot and out of them poured tales of acts of viciousness worthy of the great Lucifer himself, stories told through the night, the tortures, the beatings, the broken bones, every school has its Tigellinus, but his had more than one and each with followers, all-American boys who delighted in discovering how much pain a soul could withstand, [...] It gets better, Doc, fucking gets better, no one dared suggest that maybe the family and the school should change, or heaven forbid, that it was the all-Americans who should be modifying their beings, no, the homo should grin and bear it dumbly..."
— Rabih Alameddine, The Angel of History
Advertisement:

There are people who think that being LGBT+ is wrong, but not just wrong enough to avoid these people. No, they believe they must take it upon themselves to punish and harm gay people, or even try to wipe them off the face of the Earth.

A way to create drama is to take a character from your show and put them in one of these two roles: bigot or gay. Then create or define another character in the other role, and set them at each other. It almost writes itself. A typical — if somewhat outdated — story used for main characters who are styled to be homophobic is to explore how they and others respond to such hateful actions carried out. A similarly typical but much less historical story for gay characters is if they can recover from the trauma, being one in a short list of gay-tailored plots that are often the only things handed out to gay characters.

If you're looking to Bury Your Gays in a way that actually takes all the attention and fallout away from the LGBT+ character, this is a great way to instead launch into a police investigation or some tract on how homophobia in general is wrong, or how the act of violence is responded to by all the straight characters.

Fear of or recovery from this kind of incident is often a source of Gayngst. Note that it can also happen to characters who are only Mistaken for Gay.

Super-Trope to Rape and Switch, being the idea of "corrective rape".

See also the Heteronormative Crusader and the Armored Closet Gay. When this gets out-of-hand and becomes ingrained into society, you may be looking at people who see it as a Final Solutionnote such as the Trope Namers themselves. It can overlap with Disposable Sex Worker, from the trope of queer folk and particularly trans women who are often depicted as sex workers and punished for this.

Example of:
Bury Your Gays