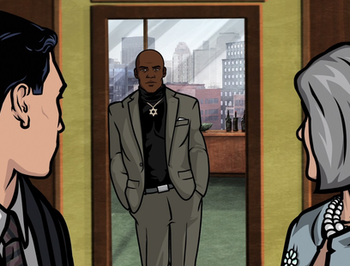 Black and Jewish? He's a diversity double-whammy!note And later on, he becomes a double amputee—so that makes him disabled, too!
"I'm Black, gay, and a woman."
— Cynthia-Rose Adams, Pitch Perfect 2
Advertisement:

Called a "twofer" by media analysts, and usually spoken of as intersectionality in a Real Life context. A cast member or show participant who represents two Token Minority groups at once. More stark when most other participants on a show are white males.

Many news broadcasting teams have a white male, and a female minority member (usually Black, Asian, or brown-often of Hispanic heritage). This allows them to have a diverse appearing team even though the number of people on their crew is small. This "twofer" is a practice that is common in the industry and is commonly criticized by media watchdogs and minority interest groups. In particular, the complaint that comes up frequently is that it limits the roles and jobs available to men of color. Unfortunately, some of these complaints are themselves rife with Unfortunate Implications, since they tend to treat minorities as an either-or phenomenon, so e. g. only heterosexual males count as non-twofer representatives of an ethnic group, while gays and women, as well as members of religious minorities, fall under automatic suspicion.

Of course, women are not actually a minority in terms of numbers, but count as such in media because of the long history of them being marginalized and are considered a 'sociological minority'.

Before adding examples, remember that the character must actually be a minority within the context of the story. If a show focuses on Black lesbians, then the whole cast wouldn't fall under this trope because they are not tokens. But if one character is Hispanic and disabled, she would. And Fantasy Counterpart Cultures only count if they're acknowledged as minorities in-universe.

A Twofer Token Minority must, of course, actually be a Token Minority in two or more groups; if there are significant members of the cast that share their membership in a particular minority group, then that doesn't count. Especially when the cast is a Five-Token Band, it often happens that you find individuals who belong to several minorities at the same time, e. e. as representative of the "melting pot" of an immigrant society through the children of an ethnically mixed couple. In a diverse cast where those minorities have broad representation, that is generally not an example of this trope.

Also, it should be noted that there can be strong correlations between belonging to one type of minority and another. For instance, in a global context, most adherents of non-Christian religions also happen to belong to non-"white" ethnic groups, which from Western perspective makes most Muslims, Hindus, Buddhists, and others worldwide automatic "twofers" (and the female ones "threefers"). And strangely enough, many twofers are Black and Jewish, yet there is almost no acknowledgment of Ethiopian Jews (Beta Israel). Not to mention the fact that race has no correlation with whether someone is LGBT, disabled, or otherwise a member of non-cultural minorities. In Real Life this is called a "double minority", with people who fit into these often having to face extra prejudices (e.g. Black lesbians struggle against racism and homophobia).

Technically a similar concept to Ninja Pirate Zombie Robot except without having anything to do with the Rule of Cool.