Fanfic / Lunch Date with a Goth, an Indie Chick, and a Wide-Eyed Bubble Boy 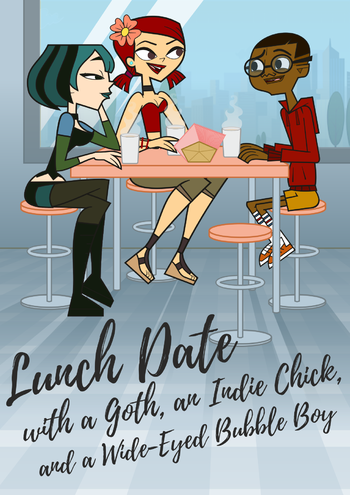 Lunch Date with a Goth, an Indie Chick, and a Wide-Eyed Bubble Boy Cover Picture
Advertisement:

Lunch Date with a Goth, an Indie Chick, and a Wide-Eyed Bubble Boy

Roughly a month after TDAS ended, three friends have lunch together. For different reasons, all three of them rarely did this sort of thing, if ever. To the shock of at least one of them, all three teens find it to be very enjoyable. Gwen, Zoey, and Cameron discuss many aspects of the previous season as well as some of the aftermath of those aspects with earnestness and humor.

The story is complete.