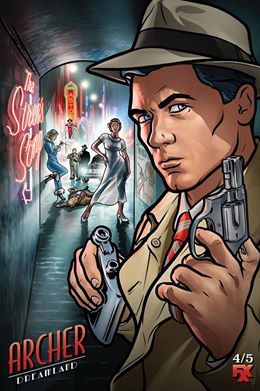 When we last left off, Sterling Archer was shot and left for dead. Season 8 reveals that he managed to survive, but ended up in a coma. When Malory and Lana visit him, they say that they're at least glad that he doesn't know that Woodhouse is dead. Archer then starts having a coma dream where he's a Private Detective in 1947, investigating the death of his partner, Woodhouse.

He eventually runs across Mother, a L.A. crime boss who runs a Nightclub named "Dreamland". She wants him to take out her rival, Lex Trexler. In return, she promises that she'll help him find Woodhouse's killer. Of course, because this is Archer, things quickly spiral out of control.

Archer Dreamland is a somewhat Darker and Edgier take on the series, and has a semi-serious Film Noir plot that sticks out compared to the pure Spy Fiction absurdity of previous seasons. It's ultimately more of a Dramedy, albeit one that still leans close to the comedy part.

A mobile app was released with this season called Archer P.I. Players work for Sterling Archer and use their phone's camera to take pictures of various items from within the episodes. This will help them get clues that are needed to solve various puzzles.

Note: Since most of the tropes from Archer still apply here, only add a trope if there's a specific instance of it.

Archer says it thrice upon seeing that his office has been ransacked.

Example of:
Rule of Three

Archer says it thrice upon seeing that his office has been ransacked.