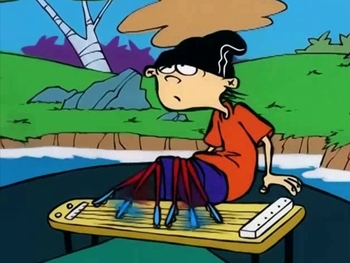 This instrument is so annoying.

Musicians who want to gain some fame or notoriety for their skills have a few options on how to go about it. Some spend a lifetime perfecting their skills at their preferred instrument, becoming among the best and most respected players in the world. Others take the path of songcraft, writing tunes that capture the hearts of listeners for decades to come...or at least long enough to be the summer's hot fad. Still others obtain fame through unusual circumstances, such as being a very young child prodigy at their chosen instrument.
Advertisement:

Others, however, take the route of showmanship. They may or may not be supremely skilled musicians or songwriters, but they're a lot of fun to watch. Some become great performers via their charisma and stage presence, others through their ability to connect to the audience, and others through coming up with bizarre, creative, entertaining ways of playing their instruments. The latter category is our focus here.

While the sky's the limit with this trope, some of its more common manifestations include playing guitar behind one's head (or with their teeth) and playing piano with body parts other than one's hands. Naturally, Impractical Instrument Playing Skills very rarely constitute a musician's primary method of performing; they're awkward and impractical by nature and actually make the instrument more difficult to play. But that's also the point — this is less about music and more about showmanship. It wouldn't be memorable or particularly entertaining if it was common or easy to do.

May overlap with Artistic License – Music if the playing techniques aren't actually possible in real life. See also Everything Is an Instrument for the use of non-musical items in making music.