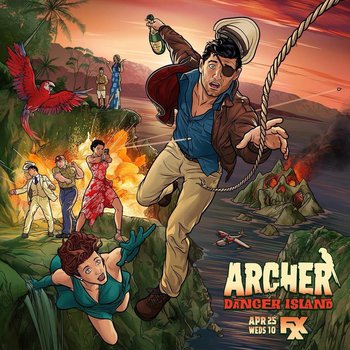 With Archer still in the coma from season 7, Danger Island moves the setting from 1947's Los Angeles to the appropriately named 'Danger Island', somewhere in the Pacific Ocean, in 1939. Nazi Germany is preparing to march through Europe, the world stands poised on the brink of total war once again, and on Danger Island, Sterling Archer - the one-eyed pilot of the cargo plane the Loose Goose - has just woken to find himself in hot water with pretty much everyone. Most of all with Cheryl Tunt, the newlywed whose marriage he just wrecked through a drunken one night stand, but also with hotel-owner Malory, local police chief Reynaud, as well as his co-pilot Pam. About the only one who isn't pissed at him is his Talking Animal sidekick Crackers.

Danger Island, like Season 8's Dreamland, once again re-imagines both the setting and the characters roles, this time creating distinct dream personas for each of the show's well-known characters as well as a rich tropical environment for them to explore. The most notable change is that Krieger is now a talking parrot named Crackers, often referred to only as 'Bird'. Other character changes include Lana being the crown princess of the island, named Mitimotu, which is occupied by the French. She has allied herself with a German agent, Cyril, in the hopes of getting Germany's assistance in driving out the French (not realizing exactly what the Nazis have in store for the world), in exchange for the mysterious tupua, or idol, hidden somewhere in the island's dense jungle. It is easier said than done as Danger Island is a virtual Death World... and the adventures are only just beginning.

Switching from Season 8's noir-theme, this season borrows heavily from the adventure serial genre, most notably Tales of the Gold Monkey which also inspired the Disney series TaleSpin, and in spite of being set in 1939, is filled with references to post-second world war cinema such as The Gendarmes of Saint Tropez, Casablanca, Catch-22 and more.

Despite this being in his dreams, Archer does the most selfless thing possible.

Despite this being in his dreams, Archer does the most selfless thing possible.