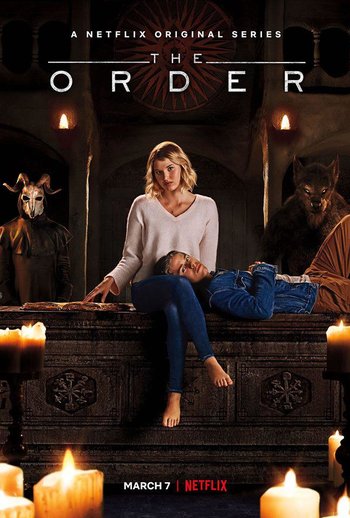 "It appears you've been summoned. Will you heed the call?"
— Edward Coventry
Advertisement:

In modern times, in Belgrave University, there lies a branch of the Hermetic Order of the Blue Rose, a cult that practices magic. Jack Morton (Jake Manley), a freshman, seeks to join this order to take down its head, the Grand Magus Edward Coventry (Max Martini). Not long after being accepted, Jack is forcefully inducted into another secret organization: the Knights of Saint Christopher, a pack of vigilante werewolves dedicated to protecting the world from evil magics by any means necessary - especially the violent ones. As the Knights' inside man, Jack struggles between two conflicting desires; protecting the innocent from the sociopaths among mages - especially Coventry - and learning how to channel magic for the forces of good with his love interest Alyssa. Unfortunately for him, he doesn't have enough time to sort out his issues - The Order has found something fundamentally wrong, and they're pulling out the stops to unleash it.

The series presents the viewers with ethical dilemmas along the way, showing situations that put 'good' at odds with 'nice', making the characters seem flawed, their choices questionable, but still maintaining the audience's sympathy for the characters, since there is no clear right choice much of the time.

Season 2 premiered June 18th, 2020. It has been announced that the series will not be renewed for a third season.

I give my life to the cause.