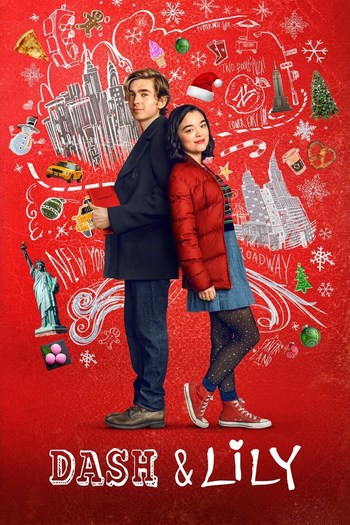 Do You Dare?
"Imagine this. You’re in your favorite bookstore, scanning the shelf where your favorite books reside, and there nestled between the familiar spines sits a red notebook. Imagine you’re in New York and it’s Christmas. You’re surrounded by people, by possibility, and the hope that somewhere in the city is that one person that’s meant for you. You just have to find them. How do you do that? It all depends on the kind of person you are."
— Lily
Advertisement:

Dash & Lily is a Netflix Original Romantic Comedy series, released in November 2020. It is created by Joe Tracz (A Series of Unfortunate Events (2017)) and adapted from the Young Adult novel Dash and Lily's Book Of Dares by David Levithan and Rachel Cohn (the minds behind the book version of Nick and Norah's Infinite Playlist).

The show focuses on a whirlwind romance between the cynical Dash (Austin Abrams) and the optimistic Lily (Midori Francis). A week before Christmas, the former finds a certain red notebook the latter left hoping it would bring her one true love to her. The thing is, it actually works — Dash and Lily get to know each other and grow as people through the dares and letters they leave for each other in the notebook. The catch? The whole thing remains semi-anonymous and the two try their best not to meet, even as it becomes increasingly clear how compatible they are.

Not to be confused with the film Dash And Lillynote although the protagonists are named for its subjects Dashiell Hammett and Lillian Hellman.

The series was canceled after one eeason.