Film / To All the Boys I've Loved Before 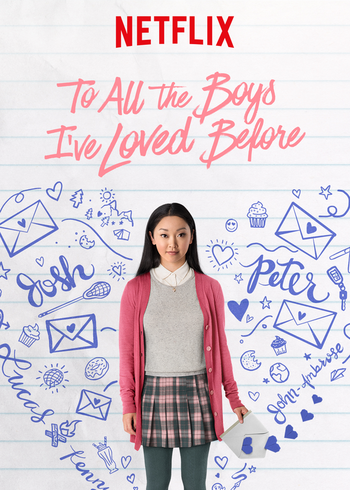 "The letters are out."
"My letters are my most prized possession. I write them when I have a crush so intense I don't know what to do."
Advertisement:

To All the Boys I've Loved Before is a 2018 Romantic Comedy based on the 2014 novel of the same name by Jenny Han.

High school junior Lara Jean Covey (Lana Condor) is a hopeless romantic who has never had a boyfriend. She has written five love letters to the most intense crushes of her life, including her childhood friend and crush Josh (Israel Broussard), who is dating her older sister Margot (Janel Parrish). Concerned for her social life, her younger sister Kitty (Anna Cathcart) sends out the letters to their intended recipients — one of whom is Peter Kavinsky (Noah Centineo), popular guy and ex-boyfriend to resident head bitch Genevieve (Emilija Baranac). Peter approaches Lara Jean with a proposition: they fake-date to get Josh, Genevieve, and the rest of the school off of their backs.