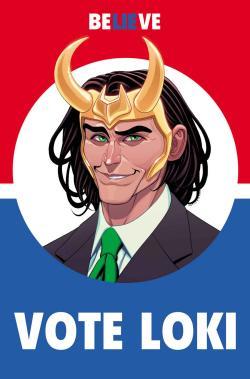 Lies you can believe in!
"The whole process is just fascinating. They're not really competing with their ideas — They are competing with stories."
— Lucas Loki, issue #1
Advertisement:

Vote Loki is a 4 issue Marvel comicbook miniseries that ran as part of the All-New, All-Different Marvel line from June to September of 2016, based on an idea of Tom King's, written by Christopher Hastings, with art by Langdon Foss. It picked up roughly where Loki: Agent of Asgard left off.

It's exactly what it sounds like, a political satire in the grand tradition of fictional characters running for presidency, in this case Loki, God of Lies... we mean Stories. Besides, what's modern politics about if not image building and presenting narratives people believe anyway?

Because this book is part of the Thor family, characters from this series can be found here.

◊ who comes from a timeline where he became President, apparently based on this storyline.

Tropes found in this comic: