Series / Pie in the Sky 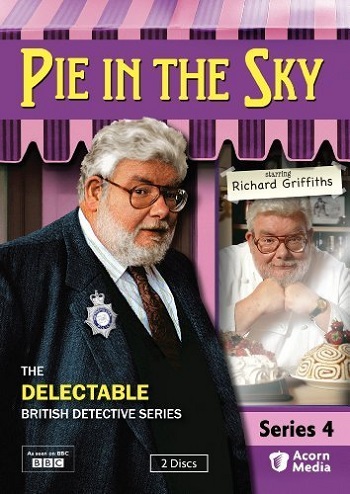 Detective Inspector Henry Crabbe is on the cusp of retirement, and looking forward to realising his dream of opening his own restaurant. He's got as far as finding a building and hiring staff when his Pointy-Haired Boss, Assistant Chief Constable Fisher — who has built his career on capitalizing on Crabbe's successes — finds a hook by which to drag him back into harness. But, to keep him from getting totally rebellious, Fisher lets him keep the restaurant.

A standard episode has an A Story in which DI Crabbe solves the mystery of the week (which is not Always Murder: this is one quiet English county that doesn't have people dropping like flies) and a B Story in which Chef Crabbe deals with some obstacle to the smooth running of his restaurant. Or vice versa.

The supporting cast includes Crabbe's accountant wife Margaret, who to his continual regret is one of those people who has no interest in food unless they're hungry and then will eat anything; the staff of the restaurant (assistant chef Steve, later Gary, and waitstaff Linda and John, later Nicola and Sally) and Henderson, the market gardener (with a somewhat shady past) who supplies the restaurant. On the policing side there is WPC Sophia Cambridge, who starts out as ACC Fisher's staff driver and gofer, and becomes Crabbe's de facto sidekick because she's the one always sent to drag him away from his restaurant when Fisher needs him. In later seasons, Cambridge transfers to CID and becomes a detective in her own right.

Not to be confused with the '80s children's series of the same name.