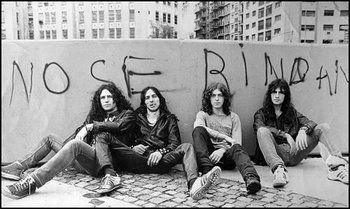 V8 was a heavy metal band from Argentina. It was started in 1979 by Ricardo Iorio and Ricardo "Chofa" Moreno, who left the band "Comunión humana" to start a heavy metal one. They made songs and got their first drummer with an advertising in a newspaper. One of their first concerts was with the band WC, and their singer Alberto Zamarbide joined V8 shortly afterwards. When he did so he brought WC's drummer, Gustavo Rowek, with them. Moreno resigned because of health reasons and proposed his replacement, guitarist Osvaldo Civile. Their show in the "B.A. Rock" concert ended in a dispute with the hippies that attended it to see the other bands. Their first LP was "Luchando por el metal", and the second was "Un paso más en la batalla".

The band moved to Brazil during the "Rock in Rio" festival, and stayed for a time with the intention to settle in the country. This started a conflict between them, so Iorio and Zamarbide returned without Civile and Rowek. They got the guitarist Walter Giardino and the drummer Miguel Roldan, but Giardino left the band because of disagreements over the style (V8 was like Motörhead, but Giardino preferred the style of Deep Purple instead). They recorded the last studio album, "El fin de los inicuos", with guitarist Adrian Cenci. The band turned to Christian Metal, and Iorio broke the band as he disliked it.

Although V8 had little recognition in its day, all their former members started more successful bands: Iorio in Hermética and Almafuerte, Civile in Horcas, and the last line-up with a new bassist in Logos. Giardino also had a successful career with Rata Blanca, but has a completely different style and he does not acknowledge his time in V8.