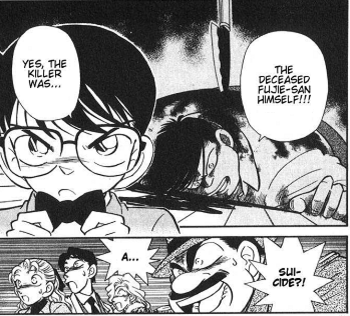 We should have known—he was always a backstabber.
Advertisement:

When The Dead Guy Did It...to themselves.

Framing an enemy for a crime is a long-established tactic for dealing with them. Framing them for murder is even better. In some places, they could wind up dead! There is a snag, however; the police may well find evidence, witnesses, and so on to link the killing back to you. If only there was a way to get yourself above suspicion. Well, there is, but it is awfully extreme.

You take the part of the victim. Kill yourself and make it look like murder.

Of course you need to be pretty committed to it, but if you have nothing else to lose...

Often played as a refreshing subversion in shows where Never Suicide, the inversion, is the norm. Sometimes the idea isn't to frame someone in particular, but to cover up the suicide as murder anyway, e.g. as part of an Insurance Fraud or in order to avoid the stigmatization of suicide. Occasionally a suicide will be covered up by a second party who wants to protect the deceased's reputation.

Subtrope of Death Is the Only Option. Sister trope of Suicide, Not Accident where instead of murder, the suicide is made to look like an accident. Also see Suicide by Assassin for instances where you hire someone to kill yourself. Exists at the intersection of Wounded Gazelle Gambit and My Death Is Just the Beginning. Sometimes, but not always, a sub-trope of Thanatos Gambit. Similar to but distinct from Taking You with Me; that trope is more of a last resort for when you were going to die anyway.

As a Death Trope, spoilers will be unmarked.