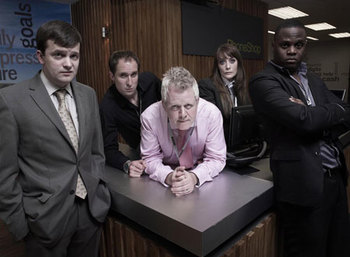 PhoneShop is a British sitcom first broadcast on Channel 4 as part of the channel's 2009 Comedy Showcase season of comedy pilots. This was followed by a six-episode series broadcast on E4 in 2010 (which was actually commissioned before the pilot was even broadcast). A second series followed in 2011, and a third in 2013.

The show is set in a mobile phone shop — a branch of the (fictional) PhoneShop Group — located on the high street of the South London suburb of Sutton. It follows a university graduate called Christopher (played by Tom Bennett) during a one-day trial and his subsequent employment. The branch is managed by Lance (Martin Trenaman) and the other employees are Ashley (Andrew Brooke), Jerwayne (Javone Prince) and Janine (Emma Fryer). PhoneShop is created and written by Phil Bowker (the comedy editor at the production company behind the show, TalkBack Thames), with "The Cast" credited as supplying additional material. It was script edited by Ricky Gervais.