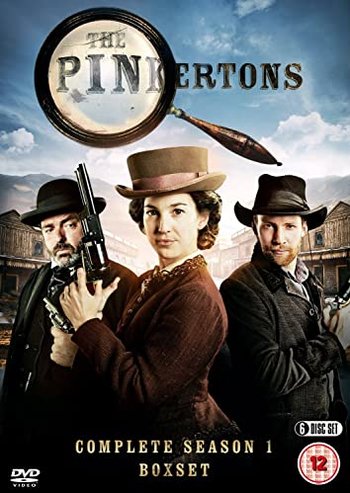 The Pinkertons is a Canadian Series that features a team of Pinkerton Detectives working in Kansas City just after The American Civil War. It ran during the 2014-15 season as the only Dramatic Hour Long series airing in First-Run Syndication in America.

When agency founder Allan Pinkerton (Angus Macfadyen) and his wayward son William (Jacob Blair) arrive in KC to do their detective work, William is surprised (and embarassed) to learn that his new partner is a woman — Kate Warne (Martha MacIsaac), a widow who's also America’s first female detective. William soon learns that Kate is not only intelligent and brave, but knows how to take care of herself. Soon, Kate and William are solving crimes in their little corner of The Wild West, aided by Allan whenever he's in town.

Recurring Characters include John Bell (Ray Strachan), Kate's African-American ranch hand, who occasionally helps the detectives; Sheriff Lawrence Logan (David Brown), who can be a competent lawman when he isn't letting the Pinkertons solve his more difficult cases; Annalee Webb (Jennifer Pudavick), owner of the Dubois Hotel, the local saloon/brothel; Kenji Harada (Dean Fujioka), a Japanese detective who eventually becomes a Pinkerton; and Miyo (Seira Kagami), a Japanese woman who goes from a Pinkerton client to Annalee's assistant at the saloon.

As of November 2016, the series is available on Netflix in the US and Canada.