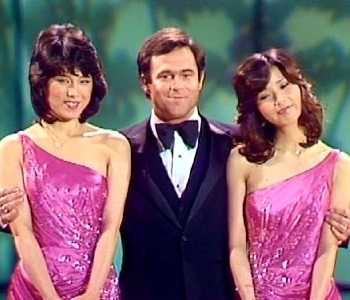 Pink Lady were superstars in their native country with a string of million-selling singles stretching back to 1976. In 1979, they made a serious run at the American market, appearing on a Leif Garrett TV special and releasing an English-language album, which included a minor U.S. Top 40 hit, "Kiss in the Dark" (the first song by a Japanese act to hit the North American charts since 1963). note (They also hosted The Chance!, a Japanese version of The Price Is Right. Clips can be seen here

. And they were the subjects of a biographical TV anime series, though oddly they did not voice themselves or sing the theme songs.) For a time, Pink Lady's record sales in Japan alone surpassed the global record sales of every other pop group, including ABBA.

In 1980, NBC head Fred Silverman saw a Walter Cronkite report about the duo. Echoing a similar situation with Ed Sullivan and The Beatles in 1964 (when Sullivan saw the Beatles in a Cronkite report and immediately booked them), Silverman greenlit their own variety show. It was helmed by Sid and Marty Krofft, featuring Mark Evanier as head writer and seasoned variety show veteran Art Fisher as director.

Mie and Kei did not speak English (the songs on their earlier U.S. album were recorded phonetically), so the producers brought in then-unknown comedian Jeff Altman to co-host the program, as he was under contract to NBC. The girls learned their few English lines phonetically, making improvisation or even much interaction with Jeff impossible. Plus, they weren't allowed to sing the songs that made them popular in Japan, instead being forced to sing covers of American disco hits as the genre was rapidly losing its popularity.

The show was canceled after five episodes, taking the already-dying variety show genre with it. A sixth episode never aired. Pink Lady ended up disbanding less than a year later (though they have reunited a few times in the years since).