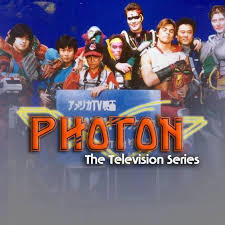 Photon (Full name Photon: The Ultimate Game on Planet Earth) was a 1987 live-action TV series and publicity device for a chain of nationwide laser tag arenas.

The story behind the show is that on every planet in the universe is a special "Photon Crystal." Every hundred years it expends its energy and must be recharged by being shot by a special laser gun, and the inherent good or evil of the person who recharges the crystal affects the entire planet: a heroic individual turns the planet into a world dedicated to good and brimming with life, while a villainous person turns the planet into a barren haven of evil.

Enter Christopher Jarvis, a teen who's just wild about the Photon game where he goes by the name Bhodi Li. When he gets a high score at his latest match he suddenly finds himself transported into space, and learns that the Photon game is actually used to recruit warriors to go around ensuring the sanctity of the Photon Crystals. While reluctant at first, Chris is soon heading down to the Photon Center whenever a special ring he wears flashes where he wins a game to signal the computer MOM to beam him up and join his alien allies in protecting another Photon Crystal, usually learning a life lesson along the way. Opposing them is the nefarious Warlord of Arr, whose minions' names also all ended in "arr" (and before you ask, yes, one of them was a pirate).

Running for only a single season and largely forgotten today, the show also managed to give rise to a series of YA novels penned by comic book writer Peter David; these books did a little to flesh out the somewhat sparse setting afforded by the show's low budget. There was also the one-shot book Thieves of Light aimed at slightly older readers that took the same setting and characters and made it all a bit less fanciful.

Unlike many shows made at the time, while there was only one season of 26 episodes, the show does have a series finale. Clips of the action sequences were later shown as the "Spaced-Out Theater" segment of Club Mario, the attempt at an update of The Super Mario Bros Super Show!.