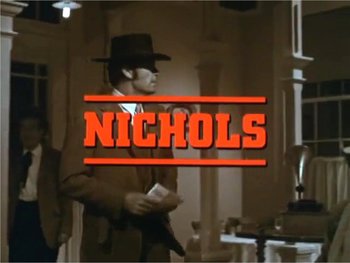 Nichols (also known as James Garner as Nichols) is an American Western television series starring James Garner and Margot Kidder. It was first broadcast in the United States on NBC during the 1971-72 season.

In 1914, Nichols, a soldier, sick of killing, returns to his Arizona hometown, named after his family, and is strong-armed into serving as Sheriff by the Ketcham clan, who run the area. Nichols, who doesn't believe in toting a gun, scoots around via a Harley-Davidson motorcycle. The Ketchams install as Deputy their relative, Mitch Mitchell. The nasty Deputy has a dog named Slump, and Mitchell is very dumb. A business-savvy local gal named Ruth has an undefined relationship with Nichols, but it's obvious there's lots of action in the back rooms of her saloon.

Tropes present in Nichols include: