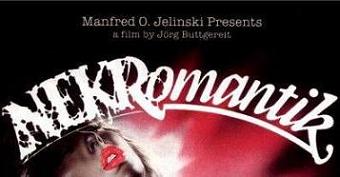 Nekromantik is a West German horror film released in 1987.

Meet Robert Schmadtke, or just Rob, an outwardly normal (but meek) German man who lives with his girlfriend Betty, and works for Joe's Streetcleaning Agency. What does Joe's Streetcleaning Service specialize in? Body parts. And that's just perfect for Rob, since he and Betty are necrophiliacs. Every once in a while, Rob just pilfers some random pieces of the mangled bodies at his worksites, taking them home and preserving them in jars for him and Betty to play with, his latest score being from a grisly car crash.

One day, Rob hits the mother lode, stealing a rotted, waterlogged corpse he and his co-workers were charged with moving. Taking the corpse home, Rob and Betty waste no time in having a ménage a trois with it. Unfortunately for Rob, his happiness does not last long, as he is fired from his job due frequent tardiness, prompting Betty to verbally emasculate him, and run off with the corpse. Now alone, Rob is left to spiral into a deep and disturbing depression...

A sequel, simply titled Nekromantik 2, was released in 1991.

No relation to Necromantic.