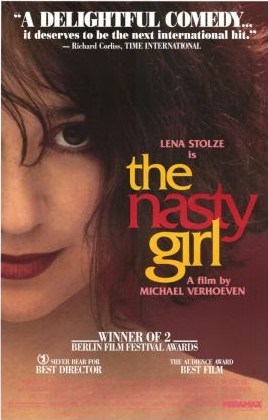 The Nasty Girl (Das schreckliche Mädchen) is a 1990 film from Germany directed by Michael Verhoeven (no relation to Paul).

Sonya (Lena Stolze) is a very bright student in the little German village of Pfilzing, in the heart of Bavaria. She is given an essay topic for a competition: "My Hometown in the Third Reich". She starts to do research for her paper but finds the people of Pfilzing strangely unwilling to talk about events 30-40 years in the past (the main story is set in the 1970s and 1980s). No one wants to talk about Father Schulte, who opposed the Nazi racial laws and was executed, or about Mayor Zumbotel, the Nazi Party functionary who was mayor of the town in those days.

Sonya gets married to Martin, her old high school science teacher, and has a couple of kids. But she feels compelled to return to her old research. Much to her surprise, she finds out that Pfilzing was a pretty thoroughly Nazified little town. The various bits of info she discovers—the old pharmacist did experiments on human beings, two highly regarded priests denounced a Jew and got him arrested, there was a concentration camp right outside of town—make her extremely unpopular. She becomes a social outcast, denounced and reviled by the people of Pfilzing, who don't like to be reminded of how they helped the Hitler regime.

Based on the true story of writer Anna Rosmus and the town of Passau.