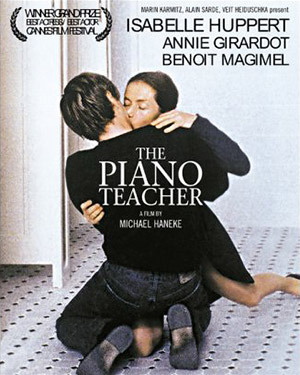 Erika (Isabelle Huppert) is a piano professor at a Vienna music conservatory, living with her overbearing bitch of a mother (Annie Girardot) whom she both loves and hates, whose father is in a mental institution, and who, despite her conservative exterior, harbors an unparalleled repressed sadomasochistic sexual appetite inside her. This combination of factors has rendered her a bit on the irritable side, and she takes this out on her students by subjecting them to ruthless criticism.

At a recital one night, Erika meets prospectless engineering student Walter (Benoît Magimel). Though it takes a long time, and despite the fact that by all appearances they cannot stand the sight of one another, the two eventually become romantically involved, behind Erika's mother's back.

Not to be confused with The Pianist or The Piano.