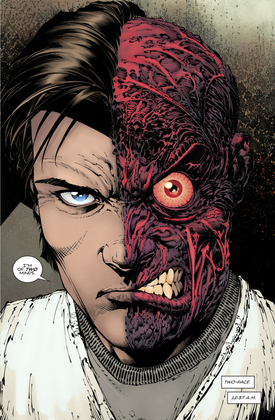 "I had a little accident, but my insurance covered half of it."
Bond: Hence "Janus", the two-faced Roman god come to life.
"Janus": It wasn't God who gave me this face.
— GoldenEye
Advertisement:

A specific type of Red Right Hand and Evil Scar, this occurs when a character (almost always a villain, usually but not always male), has a normal, generally handsome face on one side, but a disfigured, scarred face on the other side. To hide this they'll sometimes stand with their Face Framed in Shadow, and if they're feeling dramatic they'll greet the heroes with a Face-Revealing Turn. Can be accentuated with a Two-Headed Coin.

A variant is for a character to literally have two faces, one in front and one in back. The two faces will typically have different expressions and are used to represent different moods on the character's part. The Trope Codifier for this version is Janus from Classical Mythology.

May also indicate a Split Personality. Sometimes, as in the trope namer, used to represent a Duality Motif. Fashionable Asymmetry may be involved if this kind of character also wears clothes that are different on both sides. Note, villains that have this have a high chance of dying via being sliced in half along the line between the two halves.

The Fox spirit has a female human face and a fox face on the back of her head. She can turn her head 180 degrees to use the other face.

The Fox spirit has a female human face and a fox face on the back of her head. She can turn her head 180 degrees to use the other face.