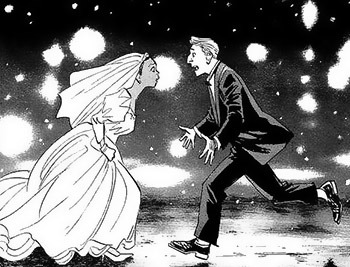 "Long separated by cruel fate, the star-crossed lovers raced across the grassy field toward each other like two freight trains, one having left Cleveland at 6:36 p.m. traveling at 55 mph, the other from Topeka at 4:19 p.m. at a speed of 35 mph."
— Jennifer Hart, submission to The Style Invitational's "Simile Outrageous"

Two lovers run toward each other in slow motion across a meadow filled with flowers and butterflies, arms spread, totally suffused in the joy of their reunion, and occasionally spinning around like a roundabout, as Tchaikovsky's Love Theme from the Overture to Romeo and Juliet

or Pachelbel's Canon in D (or some other piece deemed romantic) plays on the soundtrack.

This trope hasn't yet passed into Dead Horse Trope territory (creators can still play it straight to great effect), but even those who love it usually can't resist poking a little fun at how corny it is. Sometimes subverted by interrupting one of the lovers in mid-stride (fell, distracted by bees, picked off by sniper fire), making one lover violently allergic to all the pretty flowers, having the lover run right past his beloved because he wants whatever is behind her, etc. There are other variants that only one of them is running or that they continue running together hand in hand and skipping cheerfully on the meadow.

Can be part of Falling-in-Love Montage.

Mary, you came back!

Dick engages in a one-sided version when he sees that Mary has returned.

Mary, you came back!

Dick engages in a one-sided version when he sees that Mary has returned.