Anime / Arrow of the Orion 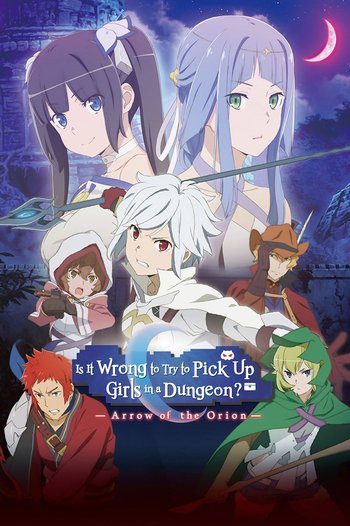 New monsters! New Goddesses! And a Whole New Level of Danger!
"Inexplicably chosen as the champion of Hestia's friend, the goddess Artemis, Bell quickly finds himself up to his neck in ruins and monsters as yet another quest begins."
— Back of the Blu-ray Case
Advertisement:

A Non-Serial Movie based on Is It Wrong to Try to Pick Up Girls in a Dungeon?.

While the Hestia Familia is having fun at the Lunar Festival, Hermes organizes an event to see if someone can get Artemis's famed spear out of a piece of crystal, many people including Aiz try but fail, when Bell gives it a try, the crystal breaks and the Goddess Artemis appears declaring Bell her "Orion". After a reunion with her old friend Hestia, she recruits the Hestia Familia to fight against a powerful monster known as Antares whose corruption is slowly destroying the world and causing monsters to go berserk.