Series / The War at Home 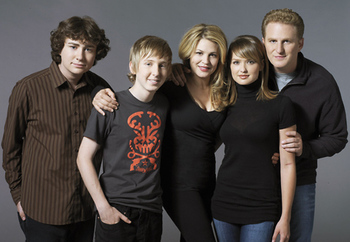 An American Dom Com that lasted for two seasons (2005–07) on Fox. The premise is that Michael Rapaport plays father and husband David Gold and has to deal with the chaos that is his family.

One of the big gimmicks of the show was the constant Fourth Wall breaking and having a character go into a white void to confess something to the audience.

The family members were:

Also appearing in the opening credits (and about half the episodes total) was Kenny, Larry's best friend, who had a crush on Larry and came out in the second season.

Did you know there was a character named Kenny in this?