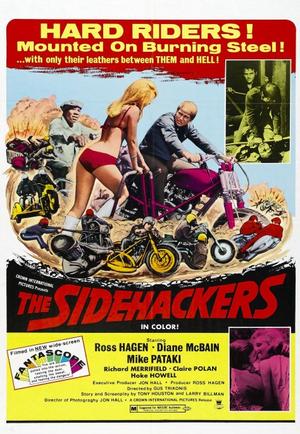 The Sidehackers (aka Five the Hard Way) is a 1969 Exploitation Film which follows the attempts of a garage mechanic and amateur motorcycle racer to avenge the rape and murder of his girlfriend.

The trouble starts when one JC and his gang bring their motorcycles to be repaired by the film's hero, Rommel. The topic of conversation turns to "sidehacking", which is basically a motorcycle race with sidecars (ostensibly for balance while turning). Rommel invites them all to his ranch to see a demonstration of this sidehacking; and JC gets totally into it, desiring to form a partnership of sorts. Rommel, for reasons unspecified, is not too keen on this idea, and JC gives us a first glimpse at his hair-trigger temper (further developed in a later scene in which JC beats up his girlfriend Paisley).

Paisley, smitten with Rommel, goes to him and flirts, apparently hoping he will whisk her away from JC. Too bad for her, Rommel is faithful to his own girlfriend Rita, and rebuffs Paisley rather harshly. Enraged, Paisley goes back to JC and claims Rommel raped her. However, JC takes his vengeance to the extreme — he goes and beats up Rommel, sure, but then he rapes and murders Rita, right in front of the helpless Rommel.

The police seem unable to locate JC; so Rommel, with nothing left to live for, sells all his worldly possessions in order to hire a gang to go exact his own revenge. He gets help from an unexpected source; a couple of JC's henchmen, Cooch and Nero, defect to Rommel's side. Except Cooch is The Mole and is secretly reporting Rommel's moves to JC. Ah, but Rommel is aware of Gooch's secret, and so this plot point... ultimately goes nowhere. In the meantime, JC gets bad vibes about Paisley's rape story and strangles her in a jealous fit.

It all leads to a final showdown in an old rock quarry, with the two gangs essentially wiping each other out and leaving JC and Rommel to have a climactic one-on-one. Rommel narrowly defeats his nemesis; but just as the police are finally arriving to arrest JC, JC shoots Rommel dead.

Can't you feel the joy of life just OOZING through your veins right now???

The film is best known for its appearance on Mystery Science Theater 3000, which wound up changing the show's history. The creators of MST3K were unaware of and unprepared for the graphic rape/murder scene, which horrified them so much that they altered the process for screening films; from this point forward, all potential movies would be screened in their entirety before being chosen for inclusion on the show. For more info on the episode, please go to the episode recap page. The original uncut film can be seen starting here.

The Sidehackers contains examples of: