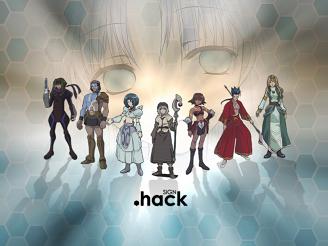 Airing back in 2002, .hack//SIGN is a 26-episode anime with 3 bonus episodes centering around a teenaged boy named Tsukasa who wakes up Inside a Computer System, an MMORPG called The World, with little memory of Real Life. Around the same time, a number of strange anomalies begin to occur in the game, causing a number of other characters to investigate the events surrounding Tsukasa and his strange connection to the game.

The show is notable for taking place inside an MMO yet featuring very little action. Most episodes consist of tense conversations between the various characters about the state of things, and the show is largely dialog driven. It does not suffer from this. Also note that, while the show's character arcs are all resolved by the end, it's also partially made to set up the .hack games; thus, parts of the plot aren't resolved in this series.

See .hack for information about the franchise as a whole.

There are character sheets.