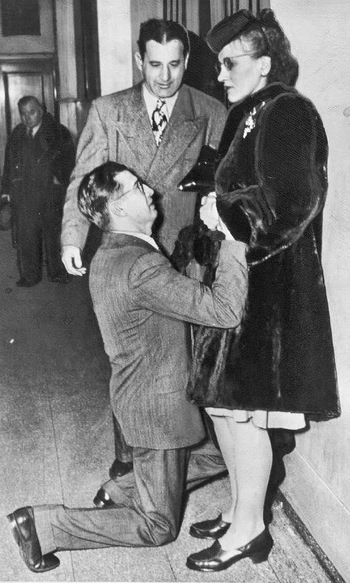 One character has hurt or betrayed another, usually their love interest. Perhaps their love learned that they only started dating because of The Bet, or perhaps the offender accuses the other of cheating. In any case, they are now in a Second-Act Breakup.

Eventually, however, the offender decides that they cannot live without their love interest or learns that they were horribly mistaken about them. But how to make it up to them? How to convince them to take you back? By groveling, an act of apology so sincere the love interest will have to forgive you. This may take the form of a long speech but occasionally circumstances call for something more drastic to prove they have really changed.

The offender is usually male and the forgiver usually female, but not always.

When done well, this trope provides drama and emotional catharsis for the audience. Debts have been repaid, sins have been forgiven, and the couple will now live Happily Ever After.

When done poorly, this trope can be seen as demeaning or emasculating the offender. The penalty is too harsh for the crime, and the apology is too extravagant for such a minor offense. On the other side of poorly done, this trope can make the forgiver appear weak. If reparations have not been made, a simple apology may be letting the offender off too easily. In real life, the Domestic Abuse cycle often consists of abuse - apology - abuse, which may imply that the abuse will continue.

This trope is common in Romance Novels, Breakup Songs, and Romantic Comedies. The Pose of Supplication may or may not be involved. See also Idiot Houdini.

"The word 'grovel' is one guaranteed to raise the blood pressure of any black man. The fact they were used by a white South African made it even worse. We were angry and West Indians everywhere were angry. We resolved to show him and everyone else that the days for grovelling were over."