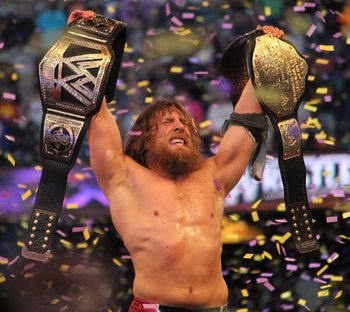 Bryan Lloyd Danielson (born May 22, 1981) is a professional wrestler who wrestled for several independent promotions throughout the 2000s and had prominent runs in many, such as Frontier Martial Arts Wrestling, All Pro Wresting, National Wrestling Alliance members such as NWA Mid-South and Extreme Canadian Championship Wrestling, Pro Wrestling Guerilla, Dragon Gate USA, Full Impact Pro and most notably Ring of Honor, where he is considered one of the three founding fathers alongside Low Ki and Christopher Daniels.

He's also worked for national promotions in Pro Wrestling NOAH and New Japan Pro-Wrestling, toured Australia, Mexico, New Zealand, The UK and served as the Heavyweight Champion of the German westside Xtreme wrestling promotion. He signed with WWE in 2009, eventually appearing on WWE's NXT promotion as Daniel Bryan. He is a WWE Triple Crown and Grand Slam Champion, being a one-time Intercontinental Champion, a one-time World Heavyweight Champion, a one-time United States Champion, had a 245-day stint as one-half of the WWE Tag Team Champions alongside Kane as Team Hell No, and is a three-time WWE World Heavyweight Champion, winning it for first time by cleanly beating John Cena before having the belt taken from him by Randy Orton and Triple H.

At Night of Champions 2013, he defeated Orton for his second WWE Championship,

He is frequently regarded by wrestling critics as one of the best overall professional wrestlers in the world today, having won The Wrestling Observer Newsletter's "Best Technical Wrestler" and "Most Outstanding Wrestler" awards several times (to the point that, following his retirement, the "Best Technical Wrestler" award was renamed the "Bryan Danielson Award"). He was trained by a who's who of wrestling, including certified legend Shawn Michaels; former WWE Intercontinental Champion

William Regal once said that the greatest accomplishment of his career was having a hand in his training.

Sadly, due to injuries, Bryan announced his in-ring retirement on February 8, 2016.

However, he later returned to WWE as the General Manager of WWE SmackDown and commentator for Cruiserweight Classic.

And before WrestleMania 2018, WWE announced that Bryan was cleared to wrestle again

He then became a 4-time WWE Champion... via low blow, turning on the fans in favor of his dreams.

His WWE contract expired in May 2021, making him a free agent, with rumors of a move to AEW rampant by late July.

At the end of AEW's All Out 2021 PPV, immediately after Adam Cole had already shockingly debuted to side with his old friends in The Elite in a heel beatdown, Danielson even more shockingly upstaged him by coming out to even the odds, becoming All Elite.