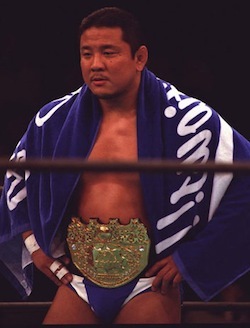 Yuji Nagata (b. 1968) is a Japanese Professional Wrestler, famous for his work in New Japan Pro-Wrestling. A former national wrestling champion, he debuted in the company in 1992 and revealed himself as a promising freshman, having matches with and against future inseparable partner Manabu Nakanishi. After Kazuo Yamazaki came to NJPW, Nagata learned shoot-style wrestling under his tutelage and became New Japan's resident shooter, gaining a new attitude. He had a stint in United States as part of World Championship Wrestling and returned to Japan to fight nWo Japan, eventually founding the Fighting Club G-EGGS to ride the Mixed Martial Arts boom. However, Yuji's shooting credentials led the NJPW head Antonio Inoki to send him to a MMA event to fight Mirko Cro Cop, who defeated Nagata and shattered his escense. Though he won the IWGP Heavyweight Championship

the same year and got a long reign, Nagata had to struggle to heal his credibility, which received a new hit after being defeated again in MMA by the feared Fedor Emelianenko. It was not until Inoki's exit from the company that Nagata could settle down as an high midcarder in New Japan, remaining until today as one of its best veterans.

He has a brother named Katsuhiko Nagata who is also a wrestling champion, as well as a more fortunate MMA fighter.