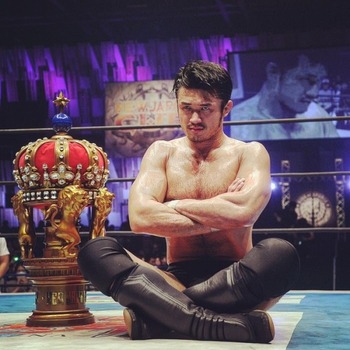 Katsuyori Shibata (born November 17, 1979 in Kuwana, Mie, Japan) is a professional wrestler and former mixed martial artist best known for working in New Japan Pro-Wrestling, although he's worked as both a freelancer in Pro Wrestling Noah and in Big Mouth Loud.

Shibata started his professional wrestling career in 1999, alongside his best friend Waru Inoue. At the time he and his fellow rookies Hiroshi Tanahashi and Shinsuke Nakamura were billed as the new "Three Musketeers of New Japan" destined to become New Japan’s biggest stars.

However that all changed when in 2005, he announced that he would be leaving New Japan Pro Wrestling and become a freelancer. Wrestling for Big Mouth Loud and Pro Wrestling Noah before embarking on a career in MMA, ending with a record of 4–11–1.

He returned to New Japan and the world of professional wrestling in 2012. Forming a tag team with another Mixed Martial Arts fighter Kazushi Sakuraba called Laughter 7. He would make further appearances in Noah, alongside Sakuraba.

Early in 2013, Sakuraba suffered an injury, leaving Shibata as a solo wrestler once again and beginning a storyline between him and his best friend Hirooki Goto which ultimately culminated in a match at Wrestle Kingdom 8. From there on he’s feuded and gone up against his fellow Musketeers, Tanahashi and Nakamura, formed another tag team with Goto called Meiyu Tag where they became the IWGP Tag Team champions at Wrestle Kingdom 9 and has participated in the G1 climax. One particular match of note was his match against Tomohiro Ishii in the 2013 G1, which earned a 5 star rating by Dave Meltzer as well as an increase of stock for both men.

and subsequently defended it against him at the rematch. On March 3, 2016, Shibata signed a one year full time contract with New Japan, ending his days as a freelancer.

Sadly, Shibata's career was cut short after a match with Kazuchika Okada at Sakura Genesis in April of 2017, when he was found with a hematoma that required emergency surgery. While he eventually recovered, it was said he would never wrestle again. As of writing, he's still working with NJPW as the head coach of their new training center in Los Angeles.

But this isn't the end. On August 12th, 2019, the night of the G1 Climax 29 finals, things got interesting. After bringing in his former tag team partner KENTA to New Japan for the tournament, everything seemed fine. Until KENTA joined Bullet Club. Shibata, enraged at this betrayal, rushed the ring and attacked his former friend, delivering his signature moves whilst also fending off Bullet Club members. Eventually, the numbers game proved to be too much, and KENTA cemented his allegiance by laying out Shibata with his own Penalty Kick and doing Shibata's signature "arms and legs crossed" pose while sitting on his chest. While this was supposed to lead to a match at Wrestle Kingdom, doctors confirmed that they wouldn't take the risk of clearing Shibata for a match ever again.

And then, from out of nowhere. On October 21, 2021, the night of the G1 Climax 31 finals, Zack Sabre Jr. came out to the ring, unadvertised. Then, Shibata's music started playing, and all of a sudden, the two wrestled in a 5-minute UWF rules exhibition match. After the match, Shibata grabbed the microphone and declared that the next time he would be in the ring, it would be a wrestling match. Come Wrestle Kingdom 16, and Shibata wrestled his first match in nearly four years, beating a fellow student of his, Ren Narita. While only time will tell just what the future of Shibata's career and health will be, one thing is certain, The Wrestler is back!