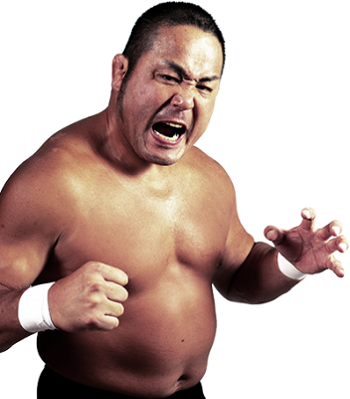 Manabu Nakanishi (b. 1967) is a Japanese Professional Wrestler, famous for his work in New Japan Pro-Wrestling. An accomplished amateur wrestler, he debuted in the company in 1992 and showed promise by the Young Lions Cup three years later, which gained him a foreign stint in World Championship Wrestling under the name of Kurasawa. When he returned to NJPW, Nakanishi developed the character of a wrestling powerhouse, wild of both strength and personality, and became a decorated tag team wrestler. He also won alone the upset of the decade by beating Keiji Mutoh in his only G1 Climax victory, but Nakanishi still proved himself less successful in his singles career, and he was eventually forced to join his long time friend Yuji Nagata and his Fighting Club G-EGGS in order to weather the Mixed Martial Arts wave, waiting for a push that would never come. He became a bigger player after the NJPW exodus, but he then found himself playing a background role to new, younger talent like Shinsuke Nakamura and Hiroshi Tanahashi. Since those times, Nakanishi has stayed relevant in the promotion through hopping at chances therea at there, finally winning his desired IWGP Heavyweight Championship

and solidifying himself as one of the most rugged veterans of NJPW.