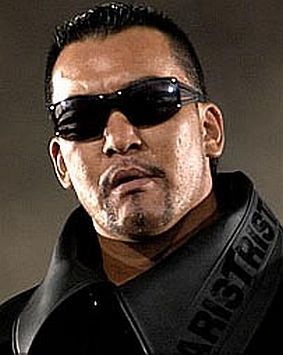 Masahiro "Masa" Chono (born September 17, 1963) is a Japanese Professional Wrestler and promoter best known for his work in New Japan Pro-Wrestling. He debuted in 1984 for New Japan and also competed in various North American territories, including the Continental Wrestling Association in Memphis, and other countries like Germany and Australia. After his return to Japan, now turned into a fast-working apprentice of Lou Thesz, he became a mainstay of NJPW's G1 Climax tournaments and won three of them, balancing them with the IWGP Tag Team Championship with Keiji Mutoh and the NWA World Heavyweight Championship. Everything changed after losing both of his championships and scoring an underwhelming win in another G1: he did a Face–Heel Turn, adopted a Yakuza gimmick and became the great villain of the promotion, getting to form part of the Japanese version of World Championship Wrestling's nWo. He eventually got tired of the stable's heroic ways under Keiji Mutoh's influence, so he left and formed his own stable, the massive TEAM 2000. After defeating and absorbing NWO Japan, TEAM 2000 began to feud with smaller factions that teamed up against the tiranny, but nothing really challenged it until the arrival of Antonio Inoki's Mixed Martial Arts corps. It seemed Chono had returned to the babyface side in order to fight off Inoki's invasion, but he demonstrated his villainess again by forming yet another massive baddy stable, Black New Japan, out of the remnants of all the factions in conflict. It was eventually disbanded by authority figure Riki Choshu after some clashes with Kazuyuki Fujita's Team JAPAN and Jushin Thunder Liger's CTU, and Chono was left to feid with his long time frenemy Hiroyoshi Tenzan. By 2010, the great times of Masahiro Chono had waned from NJPW, but its legend would live forever. He works as a freelancer now.