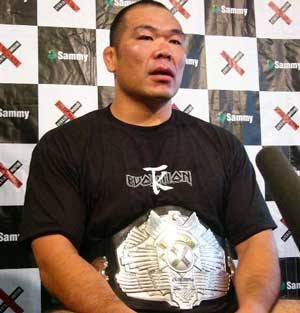 "I am working on this very interesting guy, who just came in from Judo. In three years or so, no one will be able to beat him."
—Akira Maeda
"Shortly after Maurice Smith fought Conan Silveira, I fought Tsuyoshi Kohsaka in RINGS. It was another thirty minutes fight. It was thirty minutes of complete agony."
—Frank Shamrock
"Technique and physical strength are for sure a factor, but Kohsaka-san taught me that mental strength is the most important aspect."
—Yuta Watanabe, Kohsaka trainee
Advertisement:

Tsuyoshi "TK" Kohsaka (born March 6, 1970) is a Japanese Professional Wrestler and Mixed Martial Arts fighter. He started as a high level Judoka, but a knee injury forced him to retire, and he became a trainee for professional wrestling promotion Fighting Network RINGS. His judo training and natural ability for legit shoots allowed him to climb up the scale by winning the MMA Lumax Cup representing RINGS, but he also showed a brilliant skill for worked matches, engaging in awesome shoot-style battles with guys like Volk Han and Kiyoshi Tamura. In a time in which wrestlers were either great workers or great shooters, Kohsaka was the rare example who could excel more or less equally in both, and he and his perennial rival Tamura were candidates to torchbearer of RINGS after the retirement of RINGS founder Akira Maeda, but it was too much for them. Nonetheless, TK met some future MMA legends in the ring and was the first Japanese top player in Ultimate Fighting Championship, and also was a part of the pioneer team The Alliance with Frank Shamrock and Maurice Smith. After his tenure in RINGS, he dabbled in New Japan Pro-Wrestling and snatched a championship in Pancrase, and eventually retired with some last showings in PRIDE Fighting Championships. He works now as a MMA trainer, being the old master behind names like Hirotaka Yokoi and Katsunori Kikuno.

He is the innovator of the TK Guard, which is a different grappling position depending who you ask. Also, he must not be confused with another certain TK, nor with another TK again.