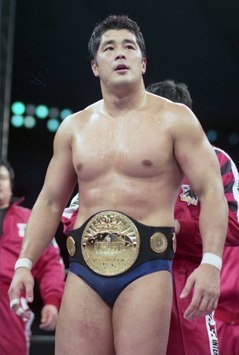 The Esperanza of Pride.
"Takada was still a hero to his countrymen. There was no shame in losing to a man largely regarded as the greatest jujutsu fighter alive. What's more, Takada continued fighting and took on the top heavyweights that are conspicuously absent from Gracie's fight record, like Mark Coleman, Mark Kerr and Igor Vovchanchyn. Sure, Japanese fans were disappointed when he lost, but they still loved and respected him because he took up the challenge instead of protecting his reputation. He was showing the courage and daring they expected from a hero."
— Keith Vargo, Black Belt magazine writer, April 2003
Advertisement:
"Men among men, COME OUT!"
— Nobuhiko Takada

Nobuhiko Takada (born April 12, 1962) is a retired Japanese Professional Wrestler and Mixed Martial Arts fighter, best known for his role in the existence of PRIDE and the Japanese MMA boom. He debuted in 1981 for New Japan Pro-Wrestling and competed as a promising rookie, acting as Antonio Inoki's assistant and replacing Tiger Mask in a high-level event in Canada. Eventually he left with Akira Maeda, Sayama and other wrestlers to form Universal Wrestling Federation, pioneering the realistic shoot-style wrestling. Upon his return to New Japan, he and Maeda figured as the young leaders of the shoot movement, gaining the IWGP Tag Team Championship with him and the IWGP Junior Heavyweight (and later IGWP Heavyweight Championship) himself. They left again to form the second UWF, in which he was a main star until the promotion's demise. Then Takada founded the Union of Wrestling Forces International and made himself Japan's top badass, giving legendary matches against Gary Albright and Super Vader. His star began to fade when he was forced to take part in a hopeless MMA feud against Rickson Gracie, which killed UWF International, but it gave birth to PRIDE Fighting Championship and the rest of global MMA ventures in Japan. After an ill-fated fighting career, he was appointed as PRIDE general manager and became its main executive figure along with Nobuyuki Sakakibara up to PRIDE's closure. Around this time, he also helped to found the over-the-top promotion Fighting Opera HUSTLE, where he portrayed the promotion's villain Generalissimo Takada until the character's death in 2009. Currently, Takada works as a matchmaker and spokesperson for Rizin Fighting Federation.