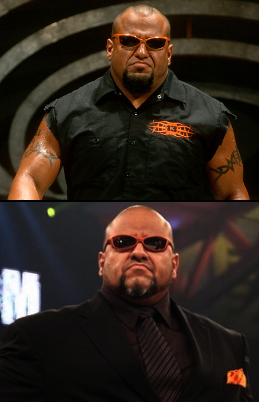 Beat me if you can.
Survive if I let you!
Advertisement:

"Because I'm Taz, The Human Suplex Machine! Beat me if you can, survive if I let you!

The name Tazz may generate some confusion depending on the generation. To younger fans, it brings to mind the George Constanza of commentators, a guy who pronounces the "w" in "sword" and obsesses over tiny details instead of the match in question.

To fans from the 1990's, however, the name Tazz evokes one of the most lethal wrestlers in the history of ECW. Born Peter Senerchia on October 11, 1967, Tazz began his wrestling career in 1987, wrestling for six years in Puerto Rico and the IWCCW promotion as well as in Smoky Mountain Wrestling and for the W*ING promotion in Japan, usually teaming with Kevin Sullivan. In 1993, however, he would debut in ECW as The Tazmaniac, and two years later, after success in the tag team division he would shed his caveman gimmick and be rechristened as Taz, and become known as "The Human Suplex Machine", using a wide arsenal of suplexes and introducing his Tazmission finisher, which, to the surprise of some younger viewers, was what introduced the tap out to North American Professional Wrestling.note Japan and UK had it since the 70s.

And now for the accolades: He is a former two time ECW World Heavyweight Champion

, holding the belts twice with Kevin Sullivan and one time with Sabu, a one time WWE World Tag Team Champion

with Spike Dudley and a three time WWE Hardcore Champion

Currently he's working in All Elite Wrestling, initially as a commentator, and then as the manager and spokesman for Team Taz, consisting of "The Machine" Brian Cage, "Absolute" Ricky Starks, and "Powerhouse" Will Hobbs, as well as Taz' own son Tyler, a trainee performing as "Hook".