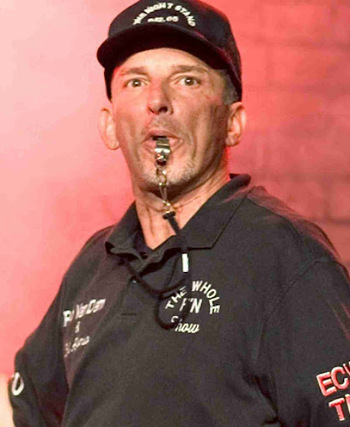 William Matthew "Bill" Sierra (born August 11, 1957) is an American professional wrestling referee and manager, better known as Bill Alfonso, most famous for his time in ECW. He debuted in Texas in 1979 and worked for various National Wrestling Alliance territories as well as for WCW and the WWF.

At ECW's Hostile City Showdown on April 15, 1995, The Sandman defeated ECW World Heavyweight Champion Shane Douglas, with Douglas taking exception to the officiating.note Sandman was lying face-up on top of Douglas in a submission hold but the referee counted Douglas's shoulders down. At Enter Sandman on May 13, Douglas brought in Alfonso as the Pennsylvania State Athletic Commission referee. Alfonso announced that if anyone hits him or anyone goes through a table, then he's shutting the show down. His first match was Tommy Dreamer and Mikey Whipwreck vs. Raven and Stevie Richards, which Raven and Richards won when Alfonso disqualified Dreamer for using a closed fist. He continued making trouble for months, culminating in him having a "match" with ECW Commissioner Tod Gordon at November to Remember on November 18, with Beulah McGillicutty, then a Heel as Raven's girlfriend, as the special referee, which Alfonso won after attacking Beulah and throwing her out of the match, leading to Taz, who was recovering from a broken neck and had been made a referee for the night, came to the ring and started to count a Gordon pin attempt, stopped, beat up Tod and threw Alfonso on top, thus turning himself heel. This would eventually lead to Taz vs. Sabu at ECW's first PPV, Barely Legal, on April 13, 1997. Taz defeated Sabu, and Alfonso turned on Taz and sided with Sabu and Rob Van Dam. He would continue to manage Sabu for a time after ECW closed, most notably in MLW. Pro Wrestling Illustrated named him "Manager of the Year" for 1997.

As usual, you can find the basics at his page

"BILL ALFONSO WILL CALL THESE TROPES RIGHT DOWN THE MIDDLE, DADDY!":