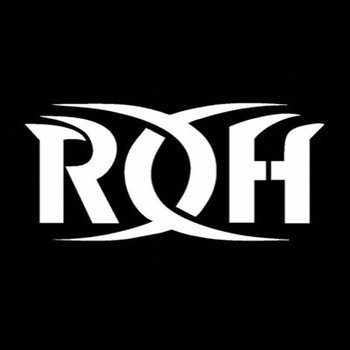 Ring of Honor (ROH) is an American professional wrestling promotion based in Baltimore, Maryland. In sharp contrast to other promotions, ROH is known for placing a heavy emphasis on in-ring action over promos or storylines.

ROH was founded in February 2002 to take the place of ECW for RF Video (which was the company's main stream of revenue). RF Video and ROH went through a messy divorce in '04, leaving behind Cary Silkin as owner and Gabe Sapolsky as head writer.

ROH served as a breeding ground of talent for TNA/Impact, WWE and eventually AEW. World Champions Samoa Joe (TNA), CM Punk (WWE/AEW), Bryan Danielson (Daniel Bryan) (WWE), Austin Aries (TNA), Tyler Black (Seth Rollins) (WWE), Kevin Steen (Kevin Owens) (WWE) and Eddie Edwards (TNA) made their names in ROH, and a host of others did the same. A number of ROH wrestlers have done tours in Japan with other promotions, and vice versa: 2005 saw Dragon Gate Invasion hosted by ROH, as well as the famous Joe vs. Kenta Kobashi match. That led to Kobashi's home company Pro Wrestling NOAH working with ROH for over three years, some ROH wrestlers touring with NOAH, and eventually a few ROH shows in Japan. In 2014, ROH announced a new international partnership with New Japan Pro-Wrestling.

In 2011, ROH was acquired by the Sinclair Broadcast Group. Not only did Sinclair add programming for their stations, but they expanded the reach for Ring of Honor. Under Sinclair, ROH would go from producing a newly-revamped weekly television series and internet pay-per-views, to producing quarterly PPV events distrubited on national television and being syndicated and picked up by non-Sinclair networks.

In fact, between a 2015 deal with Discovery Channel's Destination America to air their syndicated program on the network for twenty-six weeks; TV reruns being aired on Sinclair diginets (Comet, Charge!, and Stadium); streaming replays and PPVs on FITE TV; and the eventual launch of promotion's own streaming service in 2018, HonorClub; Ring of Honor's weekly series can be easily-seen by just about everyone regardless of platform.

Ring of Honor was considered the third-largest wrestling promotion in the United States behind the WWE and Impact. By the end of 2017, it could be argued that ROH surpassed Impact thanks to the Destination America deal, its international partnerships with promotions like NJPW, and being generally seen as a better, more stable product than Impact.note Which had been going through a long Dork Age since they were dropped by Spike TV in 2014. In addition, the combined audiences of both the cable/satellite network from the Destination America deal and Sinclair's broadcasts meant that Ring of Honor Wrestling programming was briefly seen in far more households than Impact's programming.

Ring of Honor would fall into a rut in 2019. In a year that saw many of ROH's top talent make the jump to the fledgling All Elite Wrestling promotion, ROH would suffer from flagging ticket sales due to the lack of star power; received mixed-to-negative reviews for most of their events due to poor booking; and become embroiled in various controversies. Meanwhile, the "Wednesday Night Wars" between AEW Dynamite on TNT and WWE's NXT, the biggest head-to-head clash between two major wrestling promotions since the Monday Night Wars in the 1990s, would completely overshadow the rest of the industry by that Fall.

In January 2020, Ring of Honor announced that they had re-signed Marty Scurll not just as on-screen talent, but also as head booker, and tasked him with rejuvenating the company. This partnership came to a abrupt end around a year later in January of 2021, after a wave of sexual misconduct allegations.

On October 27, 2021, it was announced that Ring of Honor would be going on hiatus to be "re-imagined" for the first quarter of 2022 following Final Battle in December 2021, and that their entire roster was released from their contracts. On March 2, 2022, Tony Khan (owner of the aforementioned All Elite Wrestling) announced he had become the new owner of Ring of Honor and the promotion relaunched with Supercard of Honor on April 1, 2022.

As an addendum, Ring of Honor was prominently featured in The Wrestler as the promotion for Randy "The Ram" Robinson's 20th Anniversary rematch with The Ayatollah, and the match itself was filmed at a Ring of Honor show.

Ring of Honor recognizes six titles that are defended at its shows (and also frequently in AEW since the Khan acquisition):