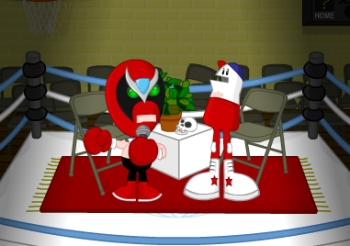 "Never before have two chairs and a potted plant so transformed the wrestling ring!"
This is very frequent in Professional Wrestling. Say Promotion A doesn't have enough actual wrestling to fill the entire show, what do they do? Give some wrestler, often a Heel or a smart-mouthed Face, his own talk show, of course. The talk show isn't really a talk show as much as it is a few chairs, or a couch, in the ring and the host simply runs his mouth.
Advertisement:

The thing about these talk shows is that they seem to always end violently. Usually the host calls out a wrestler and proceeds to either insult the wrestler directly or brag his ass off while at the same time insulting the guest. At this point, the guest's finishing move is often applied to the host's face. Sometimes, however, the guest decides to say something to the host and then, inexplicably, take his eye off of the host. Which is frequently followed by the host taking the guest's head off.

In short, regardless of the wrestlers involved, who's hosting, who's the guest, and the specifics of who is beating on whom, they always end in violence.

Was incredibly popular in the early 90s, when just about every heel in WWE got one. It made a resurgence amid the COVID-19 pandemic in 2020, when there was a need to make segments with fewer talents. With several stars who could put on one of these (The Dirt Sheet, VIP Lounge, The KO Show, A Moment of Bliss), it wouldn't be impossible to see multiple on one TV episode.

Not to be confused with Jerry Springer, Jeremy Kyle, and their ilk. Any wrestling there is only incidental.