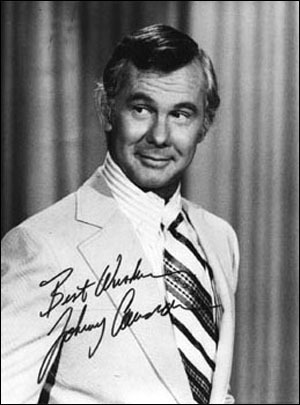 "Who's a man that we admire? Johnny Carson is a real live wire!"
"My success just evolved from working hard at the business at hand each day."
Advertisement:

Born in Corning, Iowa and raised in Norfolk, Nebraska, Carson's first taste of show business came at age 14, when he became a Stage Magician under the name The Great Carsoni, performing at local fairs and other events. Joining the US Navy during World War II, he continued to perform magic, and even had an undefeated stint as an amateur boxer.

After the war, he attended the University of Nebraska and debuted on local radio and TV in Omaha in 1950. A year later he moved to Los Angeles, where his local TV Sketch Comedy show Carson's Cellar became a favorite among established comedy names like Jack Benny and Red Skelton. Carson became a familiar face on network TV after that, appearing on variety shows and game shows. It was his tenure as the host of the game show Who Do You Trust?, starting in 1957, that first turned him into a star. The show also paired him with Sidekick Ed McMahon for the first time.

After Jack Paar decided to leave The Tonight Show in favor of a weekly prime time series in 1962, NBC chose Carson to take over Tonight. Adopting a casual, conversational approach with extensive interaction with guests (an approach pioneered by Arthur Godfrey and previous Tonight Show hosts Steve Allen and Paar), Carson helped Tonight become a ratings powerhouse by the end of the 1960s, and from then until his 1992 retirement — and even afterward — he remained one of America's most beloved entertainment icons. A further testament to his stature was his being selected to host the Academy Awards Ceremonies five times between 1979 and 1984.

Carson received six Emmy Awards, the Television Academy's 1980 Governor's Award, and a 1985 Peabody Award. He was inducted into the Television Academy Hall of Fame in 1987. Carson was awarded the Presidential Medal of Freedom in 1992 and received a Kennedy Center Honor in 1993. Fellow late-night host and friend David Letterman cited Carson as a great influence. Carson supported Letterman as his successor and was displeased when Jay Leno got the nod over him; Carson would send in jokes to Letterman and made multiple cameos, but never returned to Tonight in any capacity after his retirement.

Offstage he was well known for being a rather shy and reserved person who was only really comfortable within his small circle of friends and very rarely gave interviews, which meant that post retirement he all but vanished from the spotlight and only resurfaced for the odd guest appearance. One of these was in an episode of The Simpsons, making him one of five Tonight hosts to appear as himself on the show.

His younger brother, Dick (June 4, 1929 - December 19, 2021) spent nearly four decades working behind the scenes as a television director, earning five Emmys in his own right.